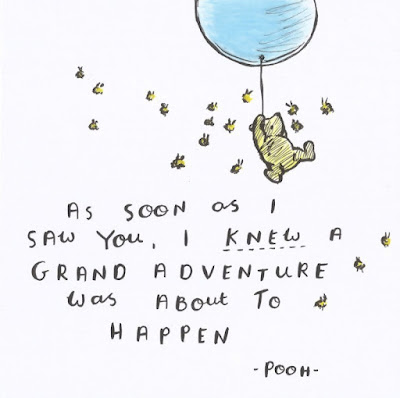 'You go up to bed and I'll come and read you a story,' my lovely Mum would say, and I'd shoot up the stairs, got washed and tucked up before she could say 'Winnie the Pooh.' As she took me to this other place, I imagined myself deep in the 100 acre woods, playing pooh sticks.

I LOVE Pooh. If you want a lesson in mindfulness and living in the now, read Pooh. And today, on Pooh day, I have been working on my own new Collection of children's stories. Before Christmas, I release 5 teeny, tiny story books to go with my new TV Series and they flew out of the door. My lovely husband and I spent every waking moment making up postal boxes and wrapping up books. The first batch sold out in just 3 days and by Christmas, I had ordered 4 batches!

I realised that this is exactly how I want to spend my life. Writing Children's Stories and making teeny tiny books. I have so many amazing things that have happened since I stepped into this whirlwind and if you'd like to stay up to date, I talk about them on my group page @ facebook. You can come and join my page HERE if you like. It will be beautiful to see you.

So, like Pooh, I am letting myself embrace the next 'grand adventure' and loving every moment. Thanks Pooh, for opening my heart at such a young age, to the idea that stories can heal us. 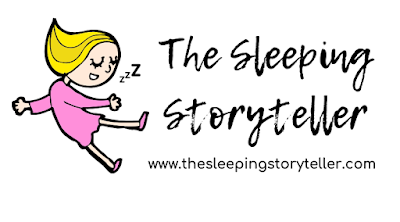 The Beautiful You-ness of You 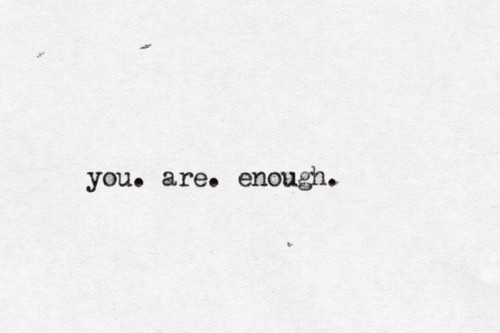 Ask yourself, what if I am enough, just as I am? How would it feel to acknowledge the whole of yourself as being completely enough? For me, it feels like a release; like I've been holding my breath and suddenly, I am breathing out.

The simple fact is, we are enough, in fact, we are more than enough, we are amazing and yet, we can so easily feel under a pressure to be somehow, more than what we are.

It can be hard work, quietening the inner voice that screams 'WHO ARE YOU KIDDING' but when this happens, it helps me to think of flowers and trees. I would never ask a daisy to be a rose, or a rose to be an oak tree, or an oak tree to be a daisy. Each is stunningly beautiful, just as it is. If we can love flowers and trees in their own right, then how come it is so hard to love ourselves in the same way? It's a rhetorical question, to which, deep down, we already know the answers.

Be still with yourself, be kind to yourself, show yourself compassion, celebrate the you-ness of you, for you are as beautiful as the daisy, the rose and the old oak tree. 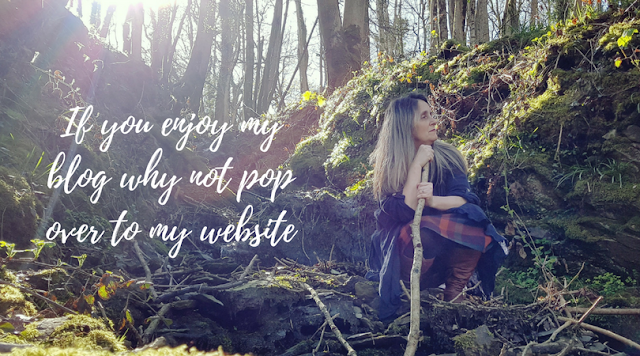 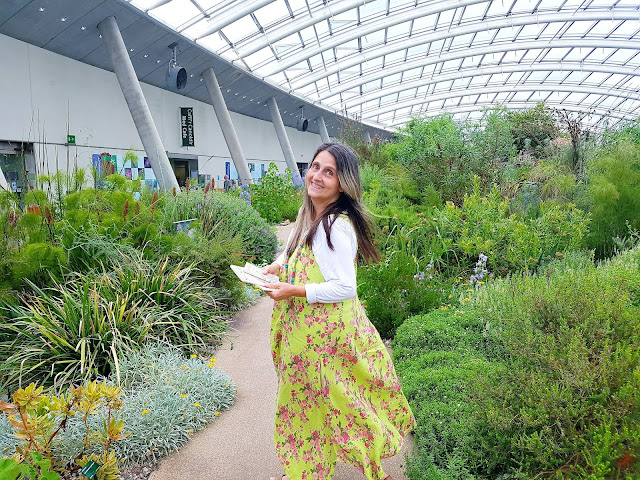 In many ways, my New Year started in September at The National Botanic Garden of Wales Storytelling Festival & Book Fair. Little did I know, that it was the start of a new life. In the last 3 months of 2018, a wonderful new career has blossomed and I have followed it, trusting my heart's desire. I share this miracle with you here, in the hope that my insight offers you hope, especially if you are in the dark place that I was myself, only 2 years ago, when I woke up with hearing loss, tinnitus and hyperacusis.

So, what is this beautiful new way of being? Well, as if by magic, I became a Children's Author, recorded and aired my first Children's TV Storytelling Series, published 7 Children's Books and released a CD Talking Book.

It has been the most amazing transition. Having said that, there has been a long journey with many pathways, leading to this wonderful new life.

One of the saddest things for me was when  my tinnitus and hyperacusis had become so overwhelming, I had to end a 30 year career as a Creative Writing & Well Being Consultant/ Practitioner in Primary Education. After working with literally 1000's of children, for more than 30 years, in the UK, Europe, India, Africa and Belarus, as well as being the Creative Director of the Children's Story Trail for 2 years at The National Botanic Garden of Wales, I felt that I could no longer cope with the noise levels in schools.

But then, when I started writing stories in my sleep, during those twilight hours, when the tinnitus ringing in my head is at its loudest, I realised that I could edit these healing, loving stories for children.

I included some of the stories in my book 'Soul Seeds; Planting Heartfelt Stories' which was released as a Limited edition of 100 copies in June. It sold out within weeks, but the feedback was very interesting to me. It was a book for grown ups about how I was learning to cope with my hearing disabilities, but grown ups were telling me that they were reading the stories that I had included in it, to their children. Without realising it, my sleeping stories were children's stories. I decided to listen.

This became even more clear to me when I attended Carmarthen  Book Fair, organised by literary veterans Sarada & John Thompson. I wasn't even really supposed to be there, but a dear friend and author, Lazarus Carpenter, asked Sarada if he could share his table with me, so that I could be included. Wasn't that kind.

Whilst at the Fair, I met John and Maxine Rolls. I told them about my sleeping stories and they invited me to their TV Station, www.showboat.TV for an interview.

Before I left, John offered me my own TV Series at Showboat, telling my sleeping stories for children. I couldn't believe it. I started to wonder why I had never thought to be a Children's Author before. I guess I was too busy being a musician, but now that music was no longer an option for me, new possibilities were birthing.

We set the film date for October and I had 3 weeks to prepare. I decided to really go for it and wrote a collection of 7 short stories for children, publishing them as a set of teeny, tiny books. I bought stuffed toys from Dawn Witt because I loved how she hand made them with recycled retro materials and used these to represent the characters in my books, but the first batch of books sold out before I had even started the filming, so I ordered another batch.

I also decided I needed to practise, so I started telling stories on a Saturday night on my Facebook LIVE. I had such a tremendous response. When I was a Singer/Songwriter, I would gig on a Saturday night, and Facebook Live gave me back a little bit of my old self. Facebook friends would ask if I was doing a story the following Saturday and in the end, I did a facebook live every Saturday night, through to New Year's Day. I set up a Storytelling Studio in our spare room and was having about 300 people watching my facebook live. How amazing! That I could sit in my cottage and 300 people watch me telling my stories, it blew me away. I know it's not like going viral or anything, but to my mind, it's a really good sized audience and it  helped tremendously, because I felt less nervous then, recording my TV Series at Showboat. The first episode went out in November and had @ 5000 views. Just think about that for a moment ... unbelievable! 5000 people watched me tell a little story I had written in my sleep.

I sold out again, of my teeny, tiny story books and had a list of people waiting whilst trying to make, wrap and send them out on time for Christmas, it was pretty manic to say the least, but I had help from my lovely husband, and from the magic elves at Penarth Printers, who were marvellous.

I also recorded a Talking Book, that sold much slower, not sure why, but that's ok. I put it down to research and trusted a different route for it would appear.

Infact, I decided to put the whole experience down to R&D. I learnt so much about myself and my confidence started to feel nurtured. Lots of lovely facebook friends took the time to write to me to say how much they enjoyed my stories. Don't get me wrong, I still struggled in crowded, noisy places but I became more confident in managing spaces, so that they became deaf friendly,

At Christmas, my children's books were part of a 3 day Christmas Fair at Sea & Salt Gallery in Llangrannog, were exhibited at Oriel Bevan Jones Gallery in Carmarthen High Street.

I launched my teeny, tiny book GWLANA at The Welsh Wool Museum in Drefach and designed my own website, learning how to set up an online shop. This was by far, the most successful retail outlet for my books. I was waking up in the morning to a list of sales in my inbox. I can't tell you how happy that made me. It was unbelievable.

It's been such a lot of hard work, but I have decided that this is definitely what I want to spend the rest of my life doing. It gives me all the buzz and joy that being a songwriter used to give me, before my hearing loss made it impossible, and also, I can fit it around my disability.

And now, it is 2019. My Talking Book has just been accepted into the West Wales Talking Book Service and I have signed a contract with Artscare Gofal Celf for the publication of my story 'The Dancing Boy & His Shadow.'

But, I have decided to do something that I have never done before, in my whole life. I am taking a step back, to slow down, to take stock, rather than letting the flow run away with me. My new disabilities mean that I have to watch my energy levels, besides, there are some artistic decisions that I want to spend time considering. I have learnt that for me,  being a Children's Author is not just for Christmas, it's for life and that means some things need to change to make it a viable career choice.

I have never before, been so excited about the next phase of my life and that is a miracle. If you had told me 2 years ago, when I sat in my bedroom, unable to come out for fear of the sound distortion caused by my hyperacusis, when I wondered if I would ever smile again, when I felt that I had lost the light in my soul, I would never have believed that the last 3 months was possible. Oh, every day is still a challenge and I have to ride with the ebb and flow, but now I can see moments of joy in my life and I am finding ways to quilt them together, weaving a new story.

Thank you for reading. I hope that my story helps you and that you manage to find the moments of joy in your days, too. Happy New Year to you. I wish you everything that you wish for yourself.

If you would like to find out more about my work as The Sleeping Storyteller, or see my teeny, tiny books, feel free to pop along to my website. Here's a link.