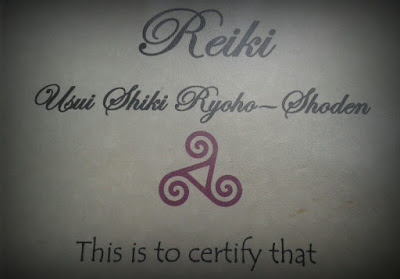 After my post yesterday, seems only polite to let you know that I completed my Reiki Level 1 today. The experience was so intensely personal I can not write about it.

whatever question you might have about the          training and how it felt, LOVE is the answer 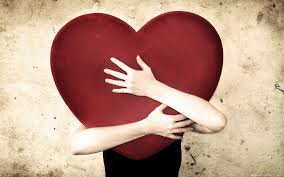 I have just sent Kiera an email to book for Reiki Level 2 so that I will be qualified to share this gift of love with the world.

Reiki Level 1: The Gift of Stillness 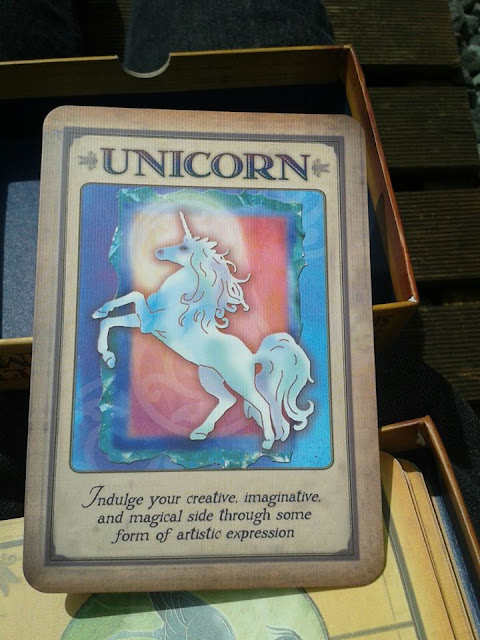 I am writing to tell you about a major shift that happened for me today during my Reiki Level 1 training at The Centre, Swansea taught with the beautiful spirit that is Keira L Jones and 3 other women who were on the course too.

I could talk for hours about how wonderful it was, how we all bonded almost immediately and how it felt more like a reunion of old friends than 4 reiki newbie's & a Master Teacher on their first day.

But instead I am going to tell you about a major block that was released through reiki attunement with Kiera as part of my course today.

I am writing about it for you, the reader, in case it helps you the way it has helped me but I am also writing this for me, so that I can come back and re-read this post to remind myself, should I need reminding.

I have been training as a Sound Healer with Kiera's husband, Jim Fox. I have invested in a new studio selling many of my life long instruments to fund this new venture.

I love Sound Healing it has become integral to my life on every level but I cannot seem to make a 'business' from it even though that was my initial intention.

I walked into the studio to receive reiki, the music playing, the treatment bed awaiting and Kiera stood smiling, her whole aura filling the room with love. And in that moment I thought to myself, I have no problem that I have paid for this experience, I am having such an incredible time here in this space that Kiera has made for us, she deserves the payment.

I cannot say it hit me like a ball of lightening because it wasn't like that, it was more like a chiffon veil being slid slowly away from my  face revealing my truth ...

I cannot take money from someone for Sound Healing because I do not feel as though I am worthy to receive.

I laid on the treatment bed and at the end of the session, I could not stop myself from crying. This realisation was a release.

I can only describe it by likening it to a tiny bird that has always been locked in a cage and believing that this is all there is, until someone opens the door one day and they realise that they have been in a cage all along.

I did not feel like jumping up and down with excitement or screaming it from the rooftops.

Instead, I felt truly still, my mind was still, no thoughts, just exhaling and weight lifted stillness. Beautiful stillness. Still.

When I went downstairs I had a good long think.

I always say 'Oh I am a giver.' I enjoy giving. The joy of giving is my reward.

I am fine with constructing a framework within which everyone gives to an event, the community etc, or putting funding applications together where I get paid from an anonymous person from the ether but I struggle with people giving me something, just for me. I prefer to give gifts rather than receive them, without really understanding why.

When I went to Kiera for my 2nd Attunement I explained to her my thoughts and she was just lovely. I realised,  now that I know why I do not give myself the things I need in my life, I can do something about it.

In addition, by insisting on being the giver, I am denying others the wonderful joy of giving.

Kiera helped me with setting an intention:
'I deserve to receive.'

And knowing this, feeling this, believing this changes everything ... it is as if a dam has lifted.

But just as when a dam lifts it can cause shock, so my body has been all over the place. I have felt sick, giddy, pale, back pain ... but I am drinking lots of water and slowly these things are subsiding in the sheer peaceful calm of knowing stillness.

I sit here now with clairty of mind, believing that I deserve to receive and that by giving the opportunity for others to give to me, tha is also giving (hope that makes sense)

Tomorrow is the second and final day of Reiki level 1. I am going to bed early and feel excited about waking up in the morning.

For further information about The Centre and all the Courses & Healing you can visit www.thecentre-swansea.co.uk

A Lesson from the Universe

So many lessons were learnt yesterday at Morfa Isaf Farm at my latest 'gather' event but here is one that has arisen since yesterday that I will need to think about for some time ...

At the start of gather yesterday, we all agreed we could take photographs and use them on line for blogs and facebook. Some people had very posh cameras, tablets, others, like me, used their phone.

This morning I realised that I had pictures of everyone throughout the day but that I didn't have any pictures of me sharing my practice of Mantra & Mudra. I was a bit disappointed because it is the first time I have shared my practice in this way and it is also the first time my old ovation guitar has been out her case since being re-fretted.

I contacted the other creatives, one of whom is doing a degree in photography, surely she would have pictures of me under that billowing fir tree singing with my old ovation & Tibetan singing bowls in the sunlight.

But no. She said she had been so in the moment that she had not taken any of me.

So I contacted my friend Sam to see if her partner had taken any photo's of me because I noticed she had quite a big posh camera but her memory card had run out during my sharing and kicked back in later during the day.

Isn't that interesting that the Universe did not want me to have photographs of myself sharing my practice? Instead she wanted me to hold onto the memory of how it felt.

I understand this lesson. When people take photographs of me they are usually terrible and I
get caught up in that squirm-ish feeling of inadequacy.

Now then, straight after the sharing, a guest staying at Morfa Isaf Farm called me over and said 'I hope you didn't mind me filming you. It was so beautiful we wanted a record of it.' and I felt uncomfortable with this.

'I didn't know you filmed me.' I said.
After all, I had my eyes shut for half the time!

Usually I would have said, 'Do you mind wiping it because you haven't asked my permission'.

It is important to be mindful about empowerment when using modern technology.

But I did not listen to my initial internal feeling. I kept very calm and inner still. She had filmed it on her tablet and so instead, I asked her if she could download a copy of the film for me, onto Mandy's computer and I could put it on my memory stick but she didn't have her computer lead with her. I gave her my email address and maybe she will send me it ... or maybe she will not.

In many ways, both of these instances are great compliments. On the one hand, my fellow creatives were so with me in the moment that they did not feel compelled to photograph me. Perhaps it felt too intimate, a moment too sacred to be disrupted with the invasion of modern age digitalisation.

Or maybe they were so involved in the mantra and mudra that it just did not enter their minds to take photographs ... which is brilliant! The mantra worked!

On the other hand, the woman who had not been in our gather group, who had watched from afar, wanted to keep a record of what she had witnessed. This is indeed a compliment even though she inadvertently dis-empowered me in so doing.

I could see in her eyes a longing to 'be' with us.

'Are you an artist too?' I asked and she explained she was an author. I invited her to join us down by the yurt. She left her husband sat in the sun and came to gather with us instead. Later she shared her newly published story in the yurt with us.

It will be interesting to see if she sends me the film and if she does, whether I decide to watch it given my learnings from this lesson sent to me today. 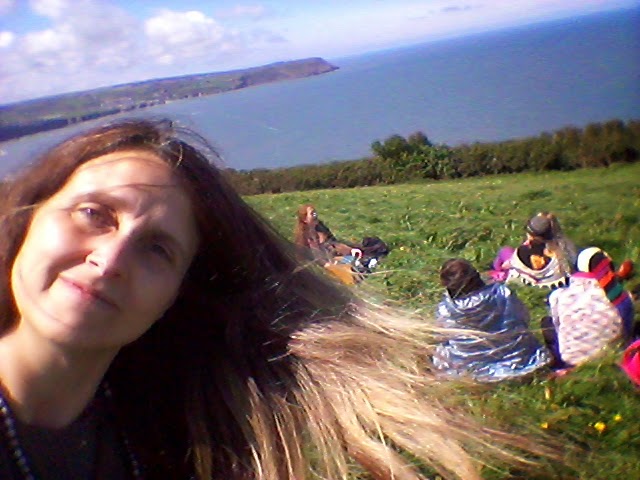 For those of you who have been following my blog for some time, you will remember that I started my Fusion Inspire journey at Morfa Isaf, in a field overlooking Llangrannog at the home of fellow creative and dear friend, Amanda Painting. It was at this place that I walked with a shaman healer and a dear friend across the fields, setting our intentions in the sunset. 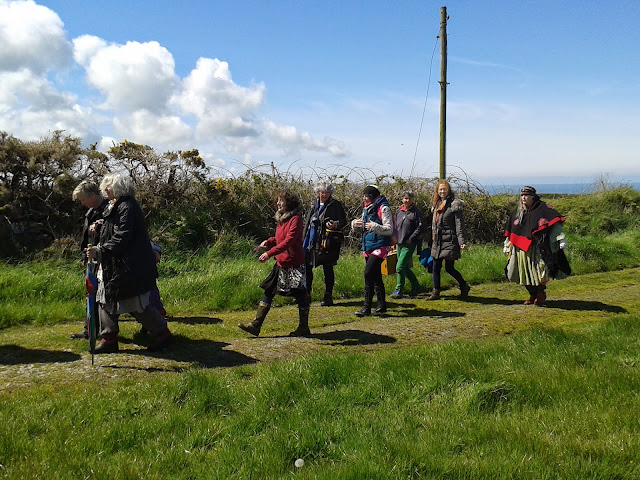 So much has happened since then! I decided to return to Morfa Isaf Farm and bring my new concept 'gather' to this sacred place. 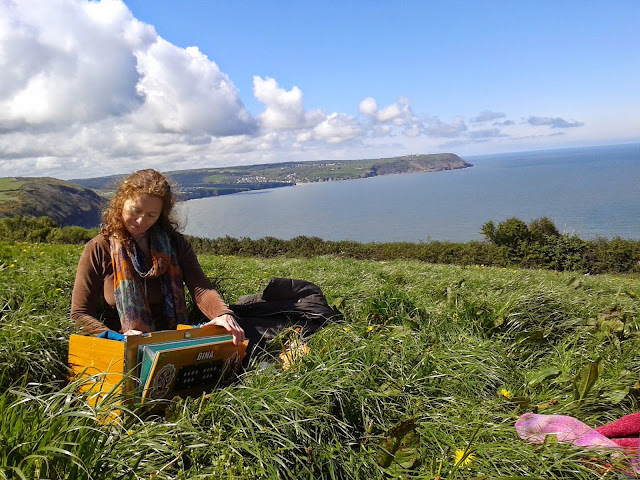 My first gather planted poetry seeds with a Spoken Word Event that I organised at Surf Cafe in Bury port. There is a regular gather there now without me, and one of the poets who attended was inspired to open his own Spoken Word Event called Tin Plate Poets in Cross Hands, who meet monthly. 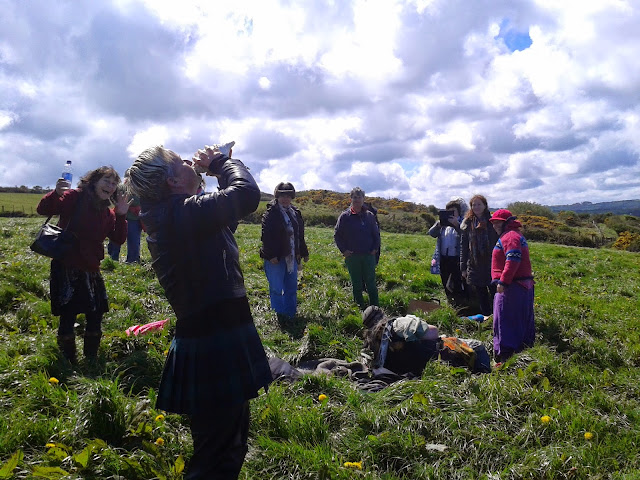 But I didn't 'feel' that gather. It was great fun, but I didn't feel it creatively. I felt like 'the organiser' and not a creative. By returning to Morfa Isaf, collaborating with my friend Amanda Painting in kindly sharing her beautiful home, I would be returning to my own creative roots and inner self. 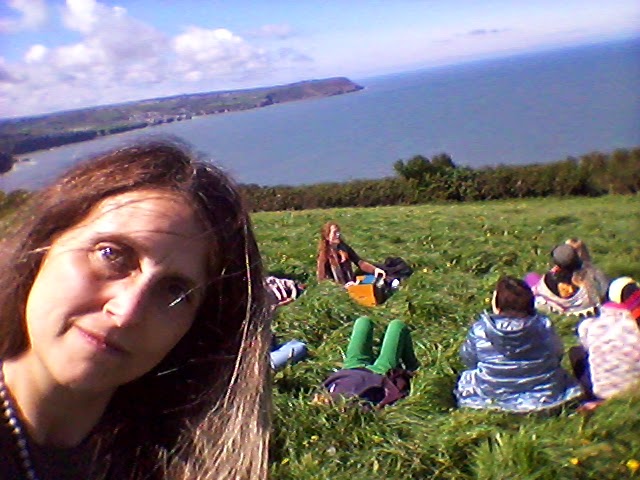 Yesterday was the first time in more years than I can remember, that I wasn't so stressed about 'the event' and this enabled me to be still & hold a space within me for myself, to be a creative, to experiment and to share my own practice with my peers. 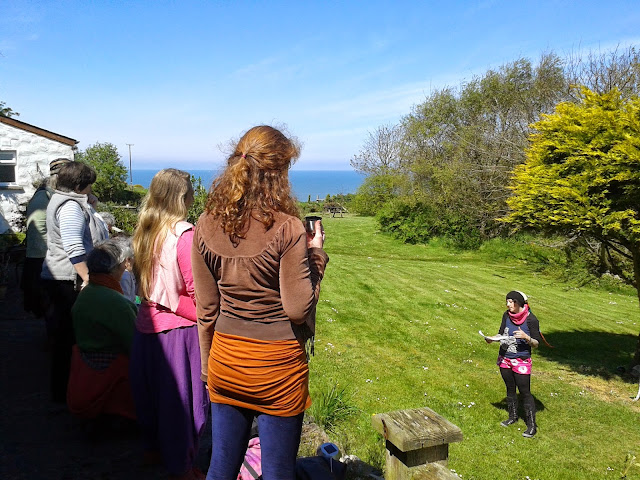 I suffer terribly from nerves and stress just before an event that I am organising and this consumes me to the extent that I can not deal with my nerves as a 'performer'. It had become that I did not perform at Events I organise, in order to deal with this. But I have never intended to be an Event Organise over being a creative! 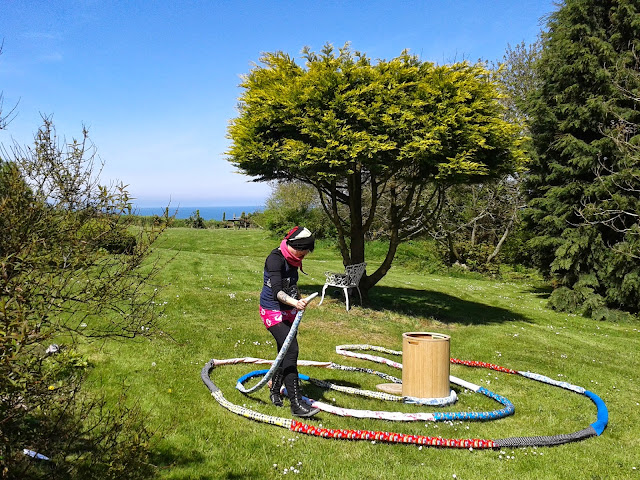 My MA drama has made me question the notion of performance and authentic self, and also to chose audience as a creative and this has had a huge impact on my practice. I will forever be indebted to my Superviser Jodie Allinson, who guided me on this tumultuous journey, because it was her voice and steady hand that I felt hold me strong in the sunshine, under the billowing fir tree sharing Mantra, Mudra & personal story. 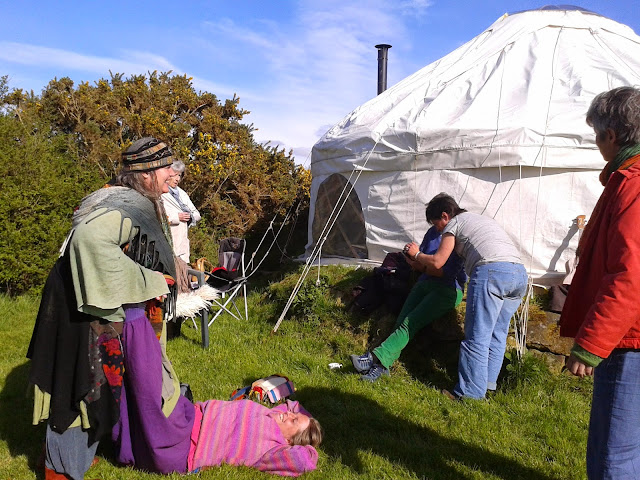 And so it is that this morning I feel calm and beautiful and overjoyed and part of something bigger than the sum of its parts.

I thank my gorgeous fellow creatives for the threads that we hold between us. 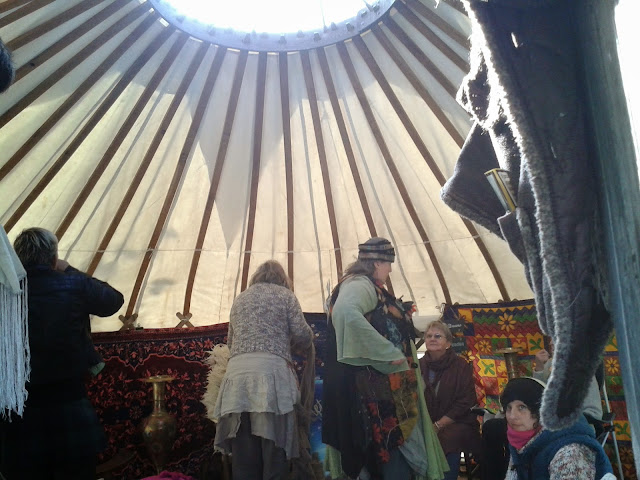 And in my heart I know this, just by coming together in this way, by 'be'ing the human being that the Universe intended, we are making change. How utterly beautiful is that. 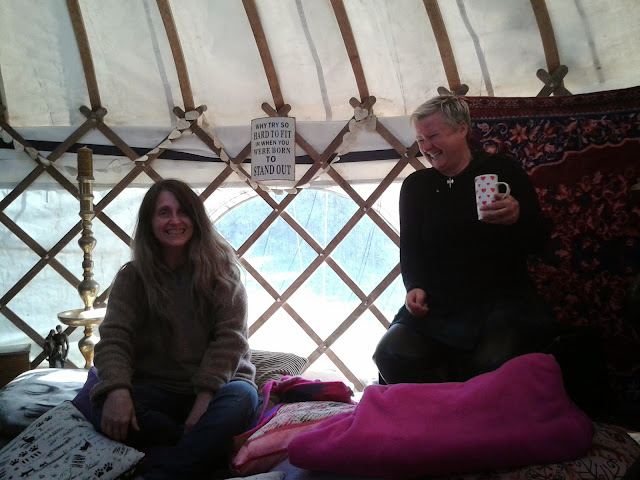