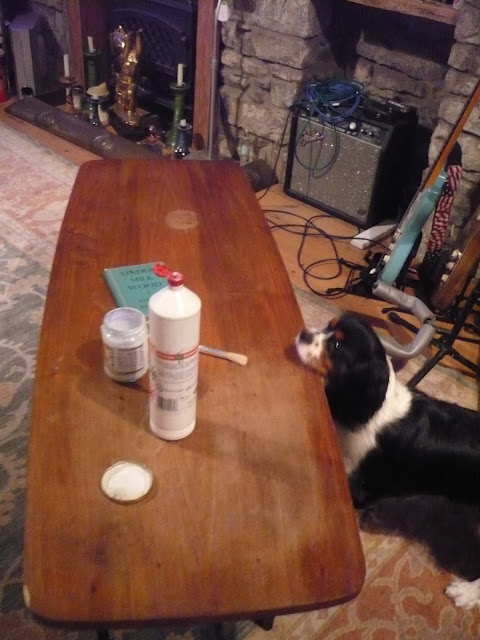 Been in the studio today for a 12 hour stint editing but our system is so old it's all real time ...
So in the slots where I was waiting for the technical stuff to do its thang .. helped by Engineer Exta-ordinaire Jeff Beer, I decided to make my Mr Blue Face Table ...
Tabl Wyneb Glas 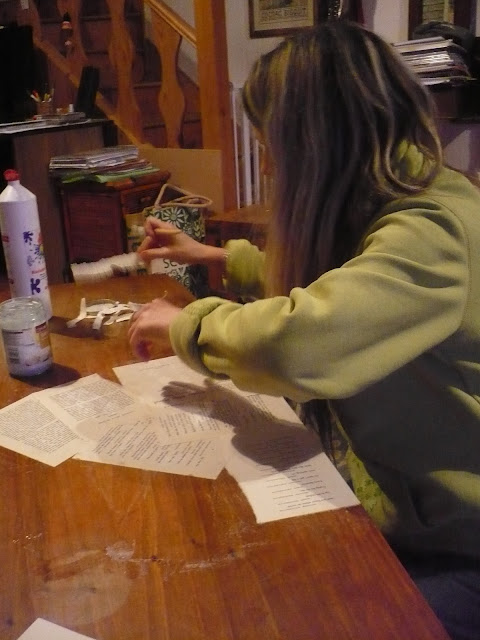 I had a thought in my head that I needed a table in the Bi Lingual Arts Installation Exhibition where I could put my journals, and a Visitors Book to record who has seen the exhibition and for comments. 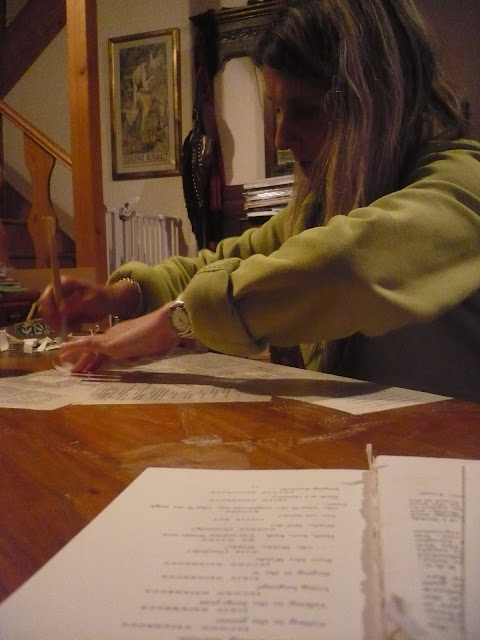 As luck would have it, I picked  up an old coffee table in the second hand shop for a fiver! 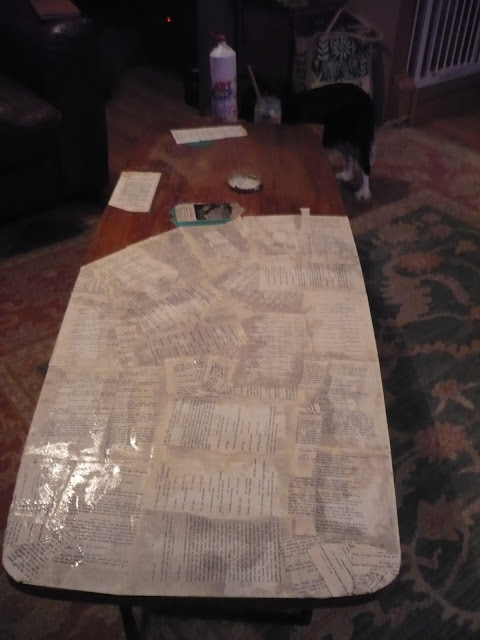 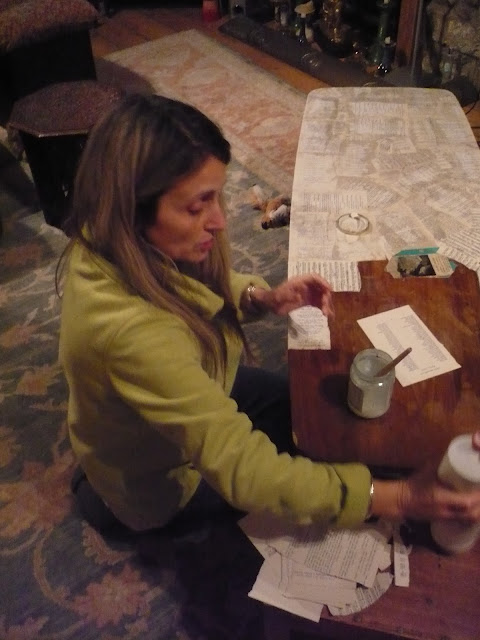 So I had this idea to make a Tabl Wyneb Glas ...
The table represents the song Mr Blueface about The Dylan Thomas Trail 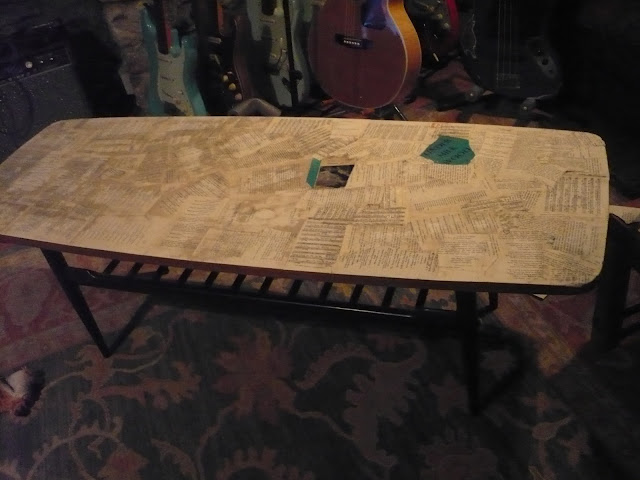 I scored the table, using upva and water.
It's lifted a bit but after about 5 coats
it seems to be sticking ok. 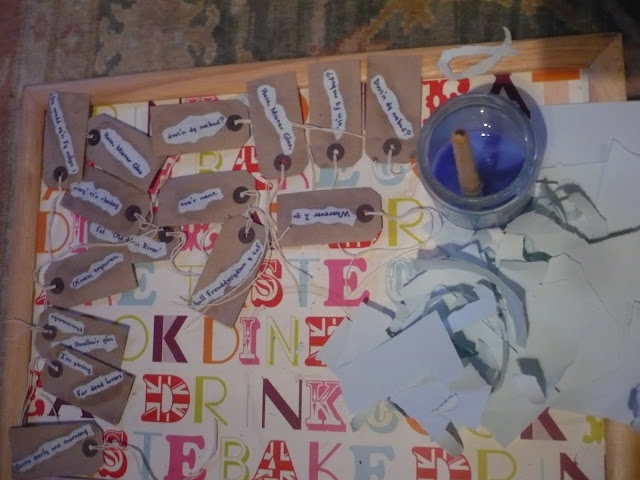 So then I printed out my lyrics to Mr Blueface that have been kindly translated for me by Chaired and Crowned Bard, Ceri Wyn Jones ... 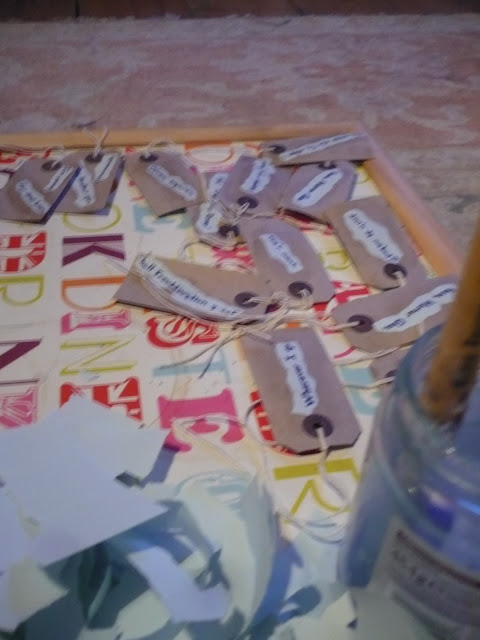 And have put the welsh on one side of parcel tags ... And english on the other 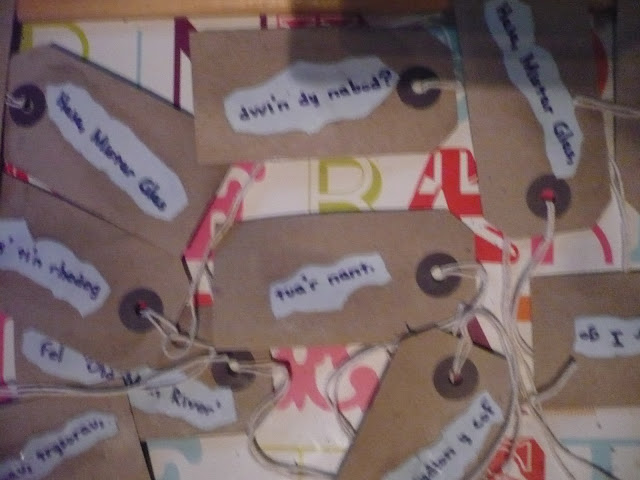 I'm going to hang these on the bars under the table .. thinking I'll use blue ribbon of different lengths. This will then link to my song Dance of the Ribbons, along with the ribbon stick that Dai Collage will be holding, made from a piece of drift wood ... and red ribbon to represent
a dragon's tongue.
I can't tell you what good fun it is and how soul lifting it is, having the time to make things for my own production. Having a grant from The Arts Council of Wales gives me this time out from my community arts work and enables me to apply all the things I use to engage others ...
to engage myself! 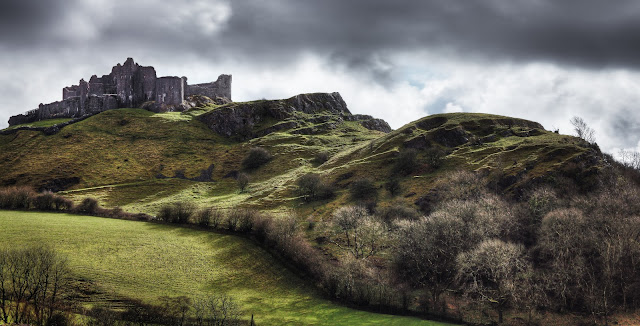 Darren Boxer is making a time lapse film for me of a Wall Art Spray of The Dragon tree that I have commissioned with the grant from Lloyd Roberts who is a GENIUS artsit. I have organised for children to come from 2 local primary schools to help with the spray. It is taking place in the Education Room at The National Botanic Garden of Wales in The Great Glasshouse, which makes me very happy in my soul!
I am planting my Dragon Tree in my favourite place. A place that has had such an impact on me over the last 2 years. It feels very special indeed.
Darren is making a time lapse film of the spray for me which will be last in the series of films. Am so chuffed. He's been a real support throughout Fusion Inspire, taking wonderful photographs of castles on the coastline for the track 600 Castles. 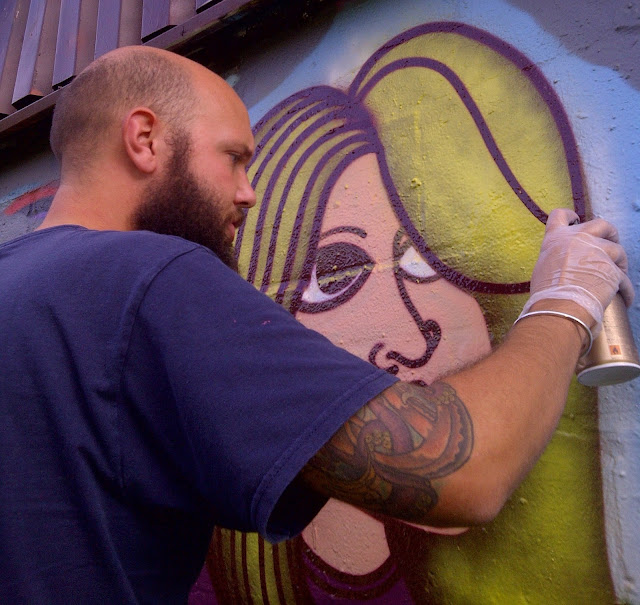 Darren & I did a creative exchange. He made a time lapse film of the arrival of The Ghost Forest at The Garden and I composed the music for the film for him, recording and performing it in my studio ... and in exchange he is doing the time lapse film for me. Thank you so much Darren.
Creative Exchange is such an important survival technique in difficult times, but I have always worked like this. It develops life long collaborations and friendships. As a freelance self employed person, it can be isolating sometimes so working with the same group of people over the years gives one a sense of team, family, sharing of like minds, community and joy.
Many thanks to
The National Botanic Garden of Wales 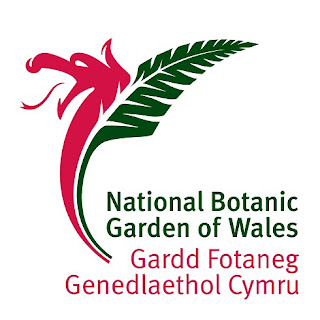 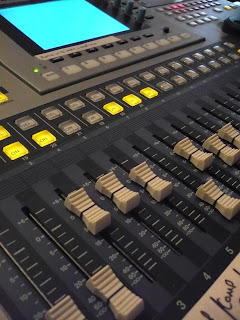 Even more blips today in the studio .. I was all for tearing my hair out and could feel my teeth grinding but have decided that's not a good look! All things are for a reason. So, I decided to walk away from it and do something else to calm down; Edited some beautiful messages from a group of Young Mums for their babies with them strumming on the ukulele. Then went back to the films to see why they wouldn't play right on the Telly. It was a dodgey DVD. Also cleaned the heads of the DVD player just incase.
My worse nightmare is the films blipping at the Exhibitions in January and Feb during the Tour, so I am defo going to find a Boffin to give me some advice!
As fortune would have it, I am doing the last filming on December 4th with a very lovely film-type-computer-y boffin! Will tell you all about it in my next blog! 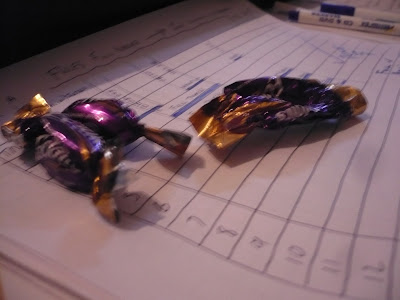 Am deep breathing and trying to be philosophical about it! There's plenty of time to sort it but I was so overjoyed to finally have completed something in total. Back to the drawing board to find out what went wrong. It was fine in the studio just when I played it on the TV. Reckon it could be something simple like a dirty head or a faulty CD (fingers crossed)

So, like a true professional, I'm going to sort this the only way I know how ...  grit my teeth, put the kettle on and have some sweets!
Posted by Cheryl Beer at 05:52 No comments: 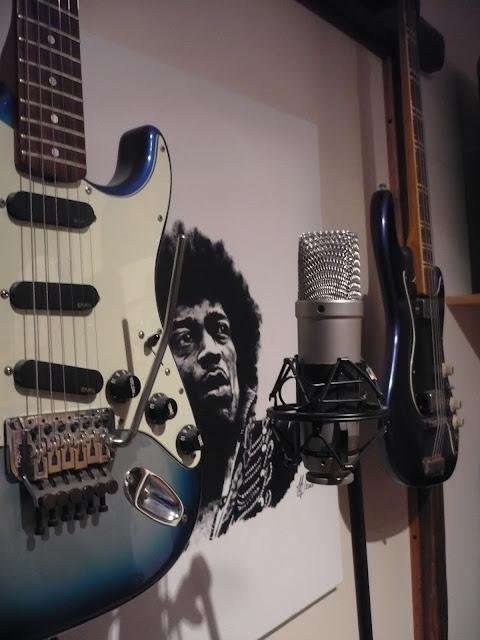 Well, having spent since March writing, composing, filming, directing and making, these last few weeks have been more focussed on producing and this weekend I have chained myself and the engineer to the studio for a 48 lock in to get to grips with the films and the soundtracks with narration, linking all the pieces into a whole. 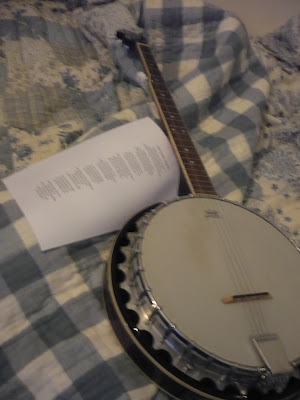 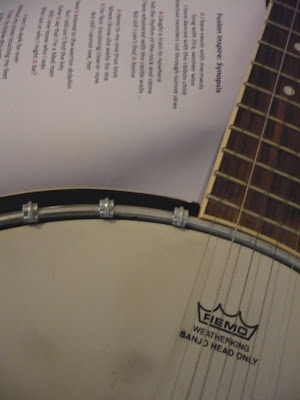 Easier said than done, let me tell ya!
Thing is, in my head, I see things as a whole; I can see the completeness. The difficult thing is translating that. I almost feel as if I could do with a USB on my forehead to download the WHOLE of The Dragon Tree in one go, but instead, I have to marry together all the pieces so that it doesn't look like a patchwork quilt, but flows as one piece.
As a songwriter, traditionally I have recorded individual tracks and put them together as albums but I want to fuse the songs, to give a concept feel; the concept being the West Wales coastline and the story that has grown from it during my journey, using old folk stories, legends and tales, coupled with people's expectations of today and their aspirations for the future.
I have now consulted with over 650 people throughout the writing process and it's important to me that I encapsulate the human element into the piece as a whole, because for me, the coastline is as much about culture as it is about beautiful landscape; we are part of that landscape. 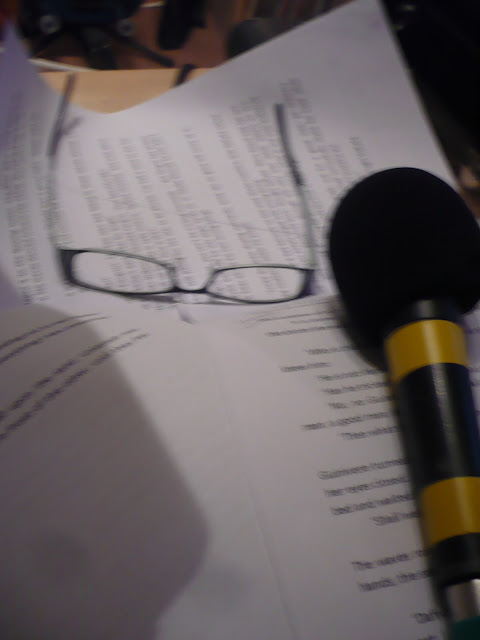 So, why do I want to do a concept piece? Basically, I'm fulfilling a childhood dream of mine. I grew up in the 70's, being born in the 60's, and my favourite times were those spent dancing to Peter and the Wolf in Juniors, or interpeting War of Worlds in Senior School!
Actually, it goes back much further than that.
I remember being about 4 or 5 years old and catching a glimpse of an animated series called The Point. It was about a boy called Oblio who had a round head. He was cast out of his village by all the triangle headed people. He had a dog a called Arrow and I remember recording the track about the dog with my mum from the radio onto our reel to reel tape recorder, as part of the Top 40 run down on a Sunday. It was called :
Me and my Shadow written by Harry Nilson who also wrote the whole story.
<>

Here's The first clip of that film The Point from the 70's. I managed to find it on Youtube and have just realised it's narrated by Ringo Star! This is years before Thomas the Tank! lol! And, the little boys voice is that of Bobby Brady from The Brady Bunch! Well I never!
Anyway, I digress ... So this childhood introduction to concept story and song  is my inspiration.
I also wanted to do a concept piece because I thought it would be a way of me encapsulating everything that I do.
I make films, I write songs, I direct, I sing, I am a musician, I write children's books, I write poetry, I produce, I edit ... I make things! I have quirky out there ideas and make them so ...
I also LOVE to challenge myself and this really has been a personal challenge creatively mostly due to my technical limitations which I will definitely address before the next production ... do you see what I wrote there!
Yes, I almost dare to say it out loud! the next production .. because I am so at one with myself in this process that I can't see me wanting to stop at the end of the funding year! 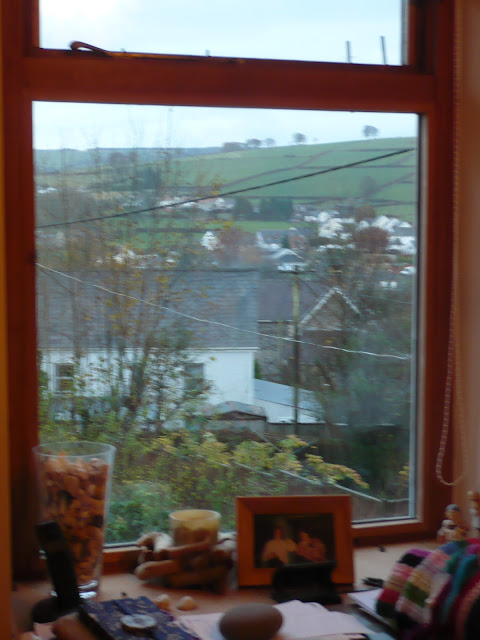 The view from my Studio Window
PS. Spooky Coincidence?!
Although written by Harry Nilson, The Point was co-written by Carol Beers ... now then, I don't know about you, but I find that a bit spooky given that my name is Cheryl Beer! (Can hear the theme music to Tales of the Unexpected in my head running right now!)
Posted by Cheryl Beer at 08:20 No comments:

Email ThisBlogThis!Share to TwitterShare to FacebookShare to Pinterest
Labels: cheryl beer, fusion inspire, fusion inspire: Journey through the creative mind, me and my arrow, studio recording, The Arts Council of Wales, the point, Welsh Government

A peek at the film scape!


The wonderful Bob Edwards somehow got left out of the photo's on the day!!
So here is a little clip that not only gives you a glimpse of what we got up to, but proves he was there!

Rob Latham was one of the actors who very kindly came to the film shoot this week at Morfa Isaf and he took this AMAZING photo which he shared with me on facebook.
It's the only pic I have of me directing the shoot. I'm sorry I can't get it any bigger on here but you can see it in its full glory on my facebook.
In the distance are Arts Care Gofal Celf LegaC Contemporary Dance troop warming up before the big sea plunge with Bob Edwards and Rob playing incarnartions of the main character, Dafydd.
On the rocks I am lining up to film the drummers who represent the echo of the waves .. what you can't see is the beautiful waterfall behind them.
I love this shot becasue it gives you a feel of the day, the wonder of the coastline, the privacy of the secret family cove.
This secret cove is owned is part of the land belonging to the Painting family and I can not thank my friend Amanda enough for welcoming us to her home for the shoot. It truly is the most magical place to stay. She has a guest house and more recent additions are the Romani Caravan and the dry dock Boat accomodation ...
www.morfaisaf.co.uk
Posted by Cheryl Beer at 03:56 2 comments: